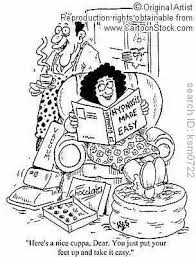 I need to be careful, cause I could really get accustomed to this life of leisure. I did nothing yesterday. Nothing! No, seriously. We had some dishes stacked in the kitchen from the night before and laundry that needed tending to, but of course couldn’t get done because he’s jacking with the water, so I had yesterday off, remember? Well, when he got home the cistern was full again, he turned on the jet pump, told me to sit down and relax, and he did the dishes and threw in a load of laundry! Huh? Did I miss something? Hold on…let me do the equation: He worked all day and I didn’t. He came home and told me to relax and he did the chores. Not only did he do them, but went outside and finished weed-eating the yard. What?! There’s a bunch of you women right now sitting back shaking your heads and pondering over what he’s up to, aren’t you? Oh, don’t think something didn’t smell fishy to me too. When do men EVER offer to do anything and just jump in and help? Well, unless they are courting you and trying to impress, or newly married and think they’re in love. It doesn’t last ladies…we know that! So imagine my confusion as I’m sitting there on the couch, drinking a beer, and watching the news while he tends to last nights, dirty cookware. If I would’ve had on jeans instead of that sundress, I would’ve been sticking my hand down the front to scratch my big-ass, female balls! Moments like that just empower me. 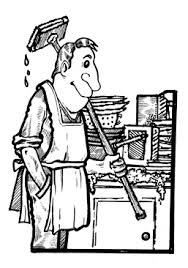 Now two possibilities came to mind when this occurred: One was that he felt bad that he’d left me sitting home all Memorial weekend, and this was his way of making amends. Ha…ha…ha…ha…Yeah, right…like I’m that gullable. And men can fly, brown cows provide chocolate milk, and I’m going to be completely happy one day…what a stretch of the imagination! The other was that he’s setting me up for something he wants to do or purchase in the near future, and this is his way of priming me. This is the more logical answer of the two, don’t you think? Yeah, me too.

You know, the funny thing is that it really doesn’t matter. Little FYI about the hubby: He’s stubborn, and does as he damn well pleases whether I like it or not.  The thing is…little FYI about me: I bitch. Now I don’t mean a little bitching that gets annoying. Oh no, when I get really mad about something it’s like there’s a train going through the damn room and there’s no way to block it out! And this Little Engine That Could and can will follow him from room to room till I’m completely exhausted and his ears are ready to bleed. Jack with me, will ya! And see, he knows this and understandably doesn’t like it, so although he will put up with it to get what he wants if he has to, he’d rather not…and anyway, I feel something ‘big’ is up. Not only that…wait for it…wait for it… he got online last night and was checking out prices for tickets to the Broadway musical, “Wicked” that’s in Omaha. Wicked! Yeah, something is friggen up! 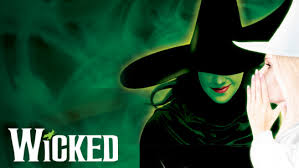 Him:  “Come mere for a minute. I wanna show you something.” He says, asking for me to come take a look at some website he’s scrolling through on the pc.

Me:  I groan as I rise from the couch, thinking here we go with another vehicle on Craigslist. Has he just not figured out yet that I’m completely uninterested in that shit?. “What?” I ask peering over his shoulder. “What the hell are you looking at?”

Him:  “Tickets for that play “Wicked” that you wanted to see. Are these good prices for that sort of thing?” He truly has no clue. This is not an act.

Me:  “Yeah, if you’re going to see Paul McCartney or Elton John, but I myself wouldn’t drop that much on a musical. Why are you looking at this again?” Yes, I’m suspicious. Wouldn’t you be?

Me:  “Yessss…and still I ask, why are you looking at this again?” The wheels are a turning in my little, blonde head, and I’m thinking…this is a guy that couldn’t get me out of the house to do something cheap over the weekend, yet he’s going to drop a boatload of money to take me to some ‘chick’ musical. Das not right!

Him:  “So you don’t wanna go?” He asks, just casually glancing over his shoulder, expecting me to buy this generous act.

Me:  “Not if it’s that much. If I wanna see a bunch of bitches fly around on brooms I can break out my own and invite friends over. No, just save your money.” Turning on the heels of my bare feet, I walked away.

Now terrible as this may sound, I’m sitting here thinking today…Hmmm, is there anything I really want? I mean, I’m no dummy and when the opportunity presents itself, which is seldom… Yes I know, I should be ashamed, but eh…sadly, I’m not. We all have our little tricks. That and shame/regret is for the weak and those who still have enough energy to beat themselves up over shit, and well… I got tired of riding that rollercoaster of emotion and self-abuse a long while ago. I think I’ll just stick to being pissy. It works for me! 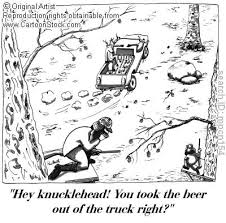 So what do you think he’s up to? Is it a car, truck, boat, fishing vacation with his buddies, what? It’s something, huh?

Oh, hey…little update on the kitties. Lucretia’s batch that have been kenneled in the kitchen are now running amuck and wreaking havoc! The old man is now having to step over them when he goes in to make my coffee in the morning. He says it’s time for the back porch. I keep referring to a couple of them as my little ‘indoor’ kitties, and he cringes…cause he knows what that means. I feel a disagreement brewing, don’t you? Sadly, he is right though. It is time for the back porch, lest my house starts smelling like a barn soon. One batch down and one to go! 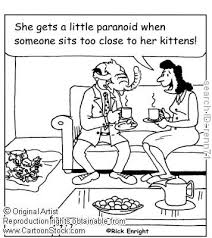