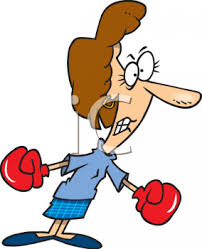 UPDATE:  In yesterday’s post I posed the question “To Wallop The Bitch Or Not?”. Surprisingly, you readers reacted different from what I thought you would. There wasn’t one “Beat the bitch’s ass!” in the bunch. Hmmm? Well, kudo’s to all of you for being mature, responsible people, and handing out wise/sound advice! I’m happy to say that possible jail/injury/irreversible hard feelings have been averted, and it looks like the problems with my son’s, girlfriend’s mother are working themselves out. At least for now, anyway. The Bi-polar Bitch changed her tune again–I truly think she’s in need of some serious meds like anti-psychotic drugs or something–and has decided that my son is acceptable enough for her daughter to date. If you’re wondering whether I’m chomping at the bit right now in anticipation of what’s next… why yes I am, thank you for your concern, and let me add a final “Just give me one freakin reason at this point to jump ugly on her!” to the answer. I say this because her arrogance infuriates the hell out of me, and the fact that she still thinks she’s the deciding factor in any of this I find incredulous. Hell, even I know that there’s only so much pull any of us has with a teenager, and when it comes to matters of the heart or who they are friends with, count your blessings if they’re decent, because whatever you may think it’s never going to be your choice. NEVER! Are we clear on that so no one is still under this illusion?

I’m proud of my son the way he handled it. He never let his temper get the best of him like it’s capable of–just bad-breeding, there’s no other excuse—he never said anything harsh that he couldn’t take back, and in fact was more mature than I was in this. Now that the Bi-polar Bitch has given them the green-light to see each other again, and is completely back-peddling on everything she said, my son has decided that she’s not only a Bi-polar Bitch, but a fake one. He told his girlfriend that he no longer likes her mother, he doesn’t like phony people, and that he thought it was real ‘chicken-shit’ of her mom not to respond to the message I left for her to call me so we could resolve this. His exact words were “Yeah, your mom knew better, cause she knows my mom will kick her ass!”. Okay, okay…I know it’s very wrong of me to actually enjoy him acting this way, but dammit…I bust my ass for this kid, I hardly ever get any adoration or proper respect from him, so let me bathe in the hero worship whenever it’s available, no matter how I get it! Okay? Geeze!!!

Well, today is the last day of school around here. I don’t know whether to say Yay! or Nay!. Yay, being that I don’t have to wake up at six am for the next few months if I don’t want to, spend a fortune and damn near have to sell a kidney to fund his lunches and the a la carte items needed to fill him up, or wash endless piles of clothes (Young men nowadays live in board shorts and little else in the summertime. You’re doing good if you can get them to wear a shirt). The Nay part is…well, he’s going to be home whenever he feels like it! Eh, not that I run much of a risk with that, but also have the added worry when he’s not that he might be getting into mischief. Okay, so I know this kid plans on being here till he graduates, which because of the prior bullshit with his father means I’m going to have him till he’s 19, but at least if I can hurry up and get him to 18 I’m not responsible if he screws up. This I believe is the greatest concern for the parent of a teenager: That your daughter doesn’t get knocked up and you end up having to raise baby, or that your son doesn’t get into trouble with damaging property, or fines from fighting, speeding, etc…that you have to pay for. It’s all about getting them from about 15 to 18 with as little drama /trouble as possible, so you can finally say “Nope…not my problem anymore! You mess up, you fix it!”

So today’s post was basically all about parenting and the little ‘kickbacks’ it gives you. Wait!…What kickbacks?…Oh yeah, the few times that your teen might actually be proud of you. Sorry, I’m still basking in the glory. Hey, this is a kid who can’t see how ‘cool’ I actually am ((cough)) and seldom has compliment one for me. I take ’em when I can get ’em! 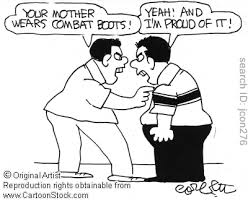 “Yeah, your mom knew better, cause she knows my mom will kick her ass!”.  I could just wipe away a tear. I always told my boys if anyone ever calls them an S.O.B. to smile and say, “Yes, I am and my momma worked hard for that name and is proud of it!”  He actually paid attention to something I said! My cup runneth over…